You Must Cut Down the Mightiest Tree In the Forest With…A HERRING! 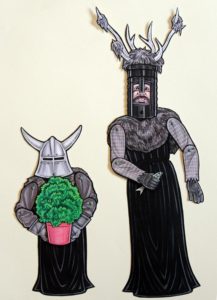 Asking the impossible of you.  That’s the status quo for the narcissist.  Whether it’s unbridled access to your bank account, home, car…life, the narcissist always, at some point, will ask the impossible of you and, worse yet, expect it! It reminds me of the scene from Quest for the Holy Grail where the Knights Who Say, “Ni!” demand that Arthur and his knights use a herring to cut down the mightiest tree in the forest.

Case in point: my narcissist actually expected me to put her above and before my (at the time), 7-year old son.  Keep in mind, this was a 36-year old woman, perfectly capable of understanding the necessary and healthy dynamic between a father and son.  Someone who should have worked to help nurture and further that relationship while becoming part of it;  however, because she was so jealous of the deep and beautiful bond my son and I have, she made every effort to divide my son and me so she could be the priority in my life instead of a priority.  She even said, more than once, that she expected to be the most important person in my life, as God had intended a husband make his wife (although we were never married nor actually engaged), even above my own son.  But when I turned the tables and said I expected the same from her (she had no children, by the way), she said, “We are not married.  When we are married, I will.”  Is that double-standard a familiar dynamic to you, as well?  If you are currently with, or have ever been involved with, a narcissist, then probably so.  But how can the narcissist expect you to make such a grandiose sacrifice, especially when you’re actually doing everything you can to make them feel important, prioritized, and loved?

In a word:  ego.  The narcissist fully expects you to put them above anyone and everyone – even your own children.  They expect you to placate them and their every need regardless of whom it impacts or hurts in your life, whom it might alienate or, worse yet, what other (healthy/innocent) relationship(s) it might destroy.  In fact, if you’ve ever been involved with a narcissist for any length of time, you know firsthand how absolutely unreasonable their expectations of you, and their place in the relationship, can actually be.  They will “urge” you to spend all your time focusing on them instead of your friends, family, children, hobbies, etc.  “I just can’t go the day without thinking about you or missing you!  Don’t go out with your friends, tonight, spend it with me.”  Now I will agree that this is a common dynamic at the beginning of most any romantic relationship – the desire to spend as much time together a.ka. the honeymoon phase – but that’s not what I’m referring to.  I’m talking about an unhealthy obsession with occupying your time, attention, affection, and commitment to them to the point that they want to be the absolute and only priority in your life, but only when they want it.  Now I know that may sound a little circular, “They want you to spend all your time with them but they don’t want to spend all their time with you?  Wait!  What?”  Let me explain.

With my narcissist, she always had something going on with “other” friends.  Yes, a very few were female, but there were a number of male “friends,” many of whom (actually all of them) had expressed a romantic interest in her, a fact she made a point of sharing with me in several occasions.  This is, in fact, what is known as a harem or reverse harem.  And whenever I would point out that she was playing with fire to “hang out” with them, and shared with her that these pursuits weren’t healthy for our relationship, as well, she’d simply counter with, “I can’t control the actions of others.  I can only control my own,” (although she never truly accepted accountability for anything she did).  She expected for me to be at peace with her flitting and flirting about town with whomever, doing whatever – technically they were dates disguised as “just hanging out” – and not take issue with the fact that she was pursuing unhealthy relationships with people who sought to destroy our relationship so they could build a new one with her.  This manipulative tactic is known as triangulation and, as we’ve already seen, the narcissist will employ such nefarious methods of psychological manipulation and control in an effort to elicit feelings of jealousy and to nurture your insecurities for the sole purpose of obtaining and maintaining a heightened position of power from which they will rain down their edicts and expectations within this abusive microcosm they’ve surreptitiously created and wherein you unwittingly reside.  This uneven exchange of power, and elevated position that goes along with, is the crux of a dynamic known as trauma bonding where the narcissist will use repeated cycles of extremely painful and then pleasurable events (highs and lows) in the relationship to form a very strong, almost unbreakable bond between themselves and their empath – you.

In this instance with my narcissist, her reverse harem of men was actually a collection of secondary sources of narcissistic supply, and the trauma-bonding from triangulation worked quite well to cement her position of power.  I recall one day in particular where she spent her birthday alone on a hike with a male friend, Dr. P., and expected me to be perfectly at peace with this.  You may recall from my post, “Am I a Narcissist?“, Dr. P. is the male co-worker who had loved her from afar for about 2-years before finally confiding his unrequited feelings to her.  He’s also the “friend” with whom she “platonically” lived for about 3-months while we were broken up, at one point.  I can tell you with absolute certainty, if I had gone on a day hike with another woman who had expressed romantic feelings for me, and with whom I had lived for an extended length of time, my narcissist would have lost her mind from sheer jealousy.  How do I know?  Because it actually happened.  While my narcissist and I were broken up, at one point, a female friend of mine, “Tammy,” asked me to go on a short hike with her.  Since my narcissist and I were no longer together, and hadn’t been for a couple of months, I went.  Why wouldn’t I?  When my narcissist and I did finally get back together and she found out about my little excursion, she became enraged, livid that I had done such a thing “to her.”  I felt horrible that I had upset her so deeply and found myself apologizing profusely, even though I had actually done nothing wrong.  She said it wasn’t right that Tammy and I went on a hike together and that she’d always suspected Tammy had feelings for me.  Do you see that double-standard rearing its ugly head again?  At least I had the decency to spend time with another woman while Julia and I were apart.  A courtesy she never extended to me.

And those are only two very small examples of a constant and repetitive string of trauma bonding events my narcissist used to systematically and successfully manipulate, and psychologically/emotionally control the relationship throughout our 4-½ years together.  What about you?  What are some of the things your narcissist has done in an effort to exact their totalitarian and despotic control over you and your relationship?

When the Swallows Return to Capistrano