Is There Any Redemption for the Narcissist?

Thus far, we have made the observation that there is no redemption for the narcissist.  We’ve even gone so far as to claim that the narcissist is a broken person who will remain reprehensibly lost and self-absorbed in perpetuity.  But is that true?  Is there absolutely no hope for our narcissist? I have searched and researched and cannot find a single case of a narcissist actually becoming an un-narcissist – i.e. cured.  Just to clarify:  we are not talking about a narcissist seeking therapy or counseling, and subsequently making a conscious effort to be a better person or behave outside of the scope of their established self-absorbed norm.  What we’re talking about is someone who actually is no longer a narcissist – truly and completely cured.

At this point, what you may be asking is, “But if a narcissist stops being so self-absorbed, doesn’t that mean they’re cured?”  Unfortunately, no.  Narcissism is a mental disorder that shares several common traits with sociopathy and

psychopathy, both APD’s (Antisocial Personality Disorders).  Amongst narcissistic traits shared with people who suffer from APD is a lack of empathy, as well as possessing an unrealistically high opinion of one’s self.  Additionally, as has been observed with psychopaths, narcissists have a tendency to develop and maintain superficial and shallow relationships specifically for the purpose of exploiting and manipulating others by being surreptitiously charismatic;  however, contrary to people suffering from APD, narcissists are generally not impulsive or aggressive, nor are they habitually deceitful – emphasis on habitually – which is to say that a narcissist will still lie profusely in an attempt to disguise or camouflage their selfish actions and or deny accountability for blatantly obvious transgressions, displacing blame at any and every opportunity.

In addition, since narcissism is a developed behavior, much like sociopathy, narcissistic tendencies are not generally displayed during childhood as those traits/mannerisms aren’t fully developed since they are usually resultant of some childhood trauma/s and or abuse.  And, unlike people with APD, narcissists 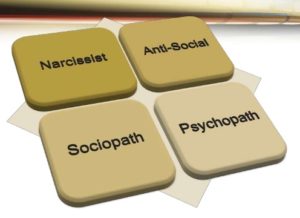 will generally compulsively seek out and gravitate towards people who feed into their uncontrollable need for adoration, admiration, adulation and boosting of their self-esteem, sense of self, and ego.  These are traits we do not see in people with APD.  So, one has to wonder if these three disorders – psychopathy, sociopathy, and narcissism – might actually be mental illnesses with a common root.  But the question remains, “Can narcissism actually be cured?”

The only case I could find of purported narcissism being “diagnosed” and cured is, believe it or not, in the Bible.  Yes, the Christian Bible actually broaches the subject of narcissism.  In the Book of Daniel chapter 4, King Nebuchadnezzar has become remarkably powerful…and completely self-absorbed.  He has a dream wherein there is a huge tree, tall and large enough that it can be 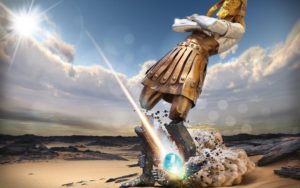 seen from all corners of the Earth, and within and beneath it all manner of creatures reside with more than enough to eat, sheltered from any harm, their every need met.  But then a voice from heaven comes down and decrees that the tree be cut down and stripped of all its branches and leaves, leaving just the stump whereupon dew settles every morning for seven years.  Nebuchadnezzar calls for every manner of sage and soothsayer to interpret the dream but no one can.  That is, until Daniel. 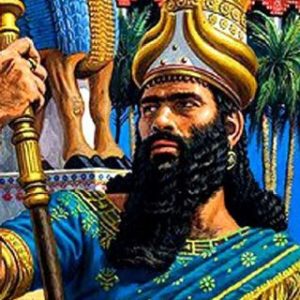 that Daniel can accurately interpret the dream – which he apparently does.  Daniel tells Nebuchadnezzar that, unless he changes his ways, God will come down from heaven and curse Nebuchadnezzar to live as an animal, eating grass with the oxen, unable to speak, and he will live like this for seven years, until he recognizes that He (God) is the truly almighty and all-powerful King of Kings, the sovereign ruler of all creation.  Of course, we can guess what happens:  Nebuchadnezzar doesn’t change his ways because, you know, he’s a narcissist.

About a year later, Nebuchadnezzar utters these ill-fated words as he walks the roof of his palace, taking in the glory of the kingdom he has created, “Is not this the great Babylon I have built as the royal residence, by my mighty power and for the glory of my majesty?”  At that moment, as the words leave his lips, God speaks, “This is what is decreed for you, King Nebuchadnezzar: Your royal authority has been taken from you.  You will be driven away from people and will live with the wild animals; you 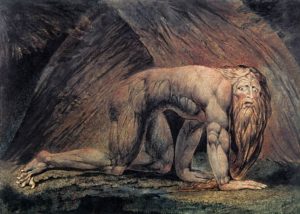 will eat grass like the ox. Seven times will pass by for you until you acknowledge that the Most High is sovereign over all kingdoms on earth and gives them to anyone He wishes.”  At this point, Daniel’s prophecy comes to fruition and for seven long years, Nebuchadnezzar lives as an animal grazing in the fields; unable to intelligibly communicate, his hair and nails growing long like an animal’s.  After seven years, Nebuchadnezzar looks up to the heavens and his sanity is suddenly restored, saying,
“His dominion is an eternal dominion;
His kingdom endures from generation to generation.
All the peoples of the earth
are regarded as nothing.
He does as He pleases
with the powers of heaven
and the peoples of the earth.
No one can hold back His hand
or say to Him: ‘What have You done?’ ”

Now, we’re not here to debate the validity of the scriptures but rather to point out that if indeed Nebuchadnezzar was a narcissist, which it most assuredly sounds to be the case, that it took a literal Act of God to change him.  But, even then, that change took seven long and grueling years of Nebuchadnezzar quite literally living in the wilderness and in the fields as an animal.  So, unless God comes down from on high and strikes our narcissist with boanthropy (the belief that one is a cow or an ox), and they are left to wallow and subsist in this delusion for seven years, it’s highly unlikely that there is any hope for our narcissist to attend any counseling or therapy and experience a subsequent epiphany wherein they finally become a decent person, much less a person worthy of your unconditional and boundless love or mine.  In short; there is no (earthly) redemption for the narcissist.

If you’re curious, you can read the scriptures that lay out the story, here.

Mirror, Mirror On the Wall