“Many times I tried to tell you,
any times I cried alone.
Always I’m surprised how well you cut my feelings to the bone.
Don’t want to leave you, really.
I’ve invested too much time to give you up that easy
To the doubts that complicate your mind.”

How many times Pat Benetar’s classic song, We Belong, echoed in my mind as I contemplated whether or not to embrace Julia’s, my narcissist’s, latest discard as the final discard so I could begin the grieving process, thus ushering in the healing process of recovering from the hellish joys of loving a narcissist.  How she could render me utterly

defenseless is beyond me.  She was undoubtedly my kryptonite.  I don’t mind to share, I’m not a little guy.  At 6′ 5″ and 220 lbs, I take up a little bit of real estate.  In comparison, Julia is 5′ 6″ and about 105 lbs.  And yet she had a way of bringing me to my knees.  And you see, that’s the thing about loving a narcissist: no matter how big or strong you might be, a narcissist has this inalienable ability to render even the mightiest among us, completely incapacitated and at their nonexistent mercy.

I have to admit, the initial love bombing phase was pretty amazing.  But then that’s the idea, isn’t it?  I’d never had someone show me (what felt like) such an unyielding and all-encompassing love, before.  I remember 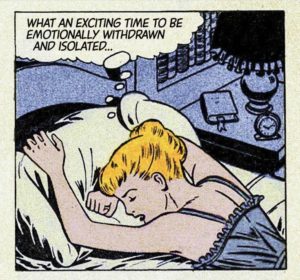 the first time Julia decided to test the waters and see just how far she could push me before I broke.  We were about two months in and had been spending almost every weekend together, as well as several nights throughout the weeks, when she suddenly decided she, “…needed some time,” because she wasn’t sure about us, anymore.  I was crushed.  I couldn’t eat, sleep, work, or function on anything above a very basic level.  I really was nothing more than a mass of raw and tangled emotions, blindly plodding through my days on autopilot.  That first discard phase lasted about a week.

After allowing me to suffer under her despotic thumb for that first week, she decided we were meant to be.  I was over the moon, to say the least.  And now that she was back, I was beyond terrified at the prospect of losing her again.  And thus began the downward spiral of a subdued, albeit very real, angst that would be ever-present for the next 4-½ years we were together…and apart.  The first night she showed up at my place, after that initial discard phase, I sat 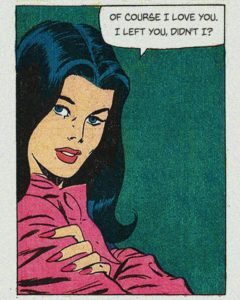 down with her and shared how I had fallen apart and asked how I could know she’d never do that to me again.  She simply smiled and said, “Because I love you and I don’t want to be without you, either.”  And as our time together went from weeks to months, and from months to years, it became increasingly difficult to accept that it could or would ever end even though our time together was peppered and polluted with a myriad of discard phases.  After all, I had invested so much of myself, sacrificing and struggling to hold on to something that I came to feel was so irreplaceable, I didn’t want to childishly give up or throw away all of that effort, all of that suffering, just because things weren’t ideal.  I mean, if loving someone were easy, there wouldn’t be divorces, or any single or lonely people, right?  After all, doesn’t love suffer the slings and arrows?  Doesn’t love endure?

The thing is, with each discard, I grew increasingly emotionally numb.  Not jaded.  Not angry.  Not even disheartened.  Just…numb.  Not that being without her didn’t hurt.  Truth be told, each discard was crushing because it was almost always on the heels of professed promises that it would never happen again.  Just how closely did each discard follow the most recent

hoovering phase?  And how long was each discard?  Eh, each hoovering phase was usually about 1-2 weeks.  And each discard would generally last about 1-2 months, sometimes 3 months at the outside most.  What I didn’t realize at the time is that Julia was simply letting me fester and suffer the loss of her and us while she eagerly and happily harvested the adulation, affection, and attention from her collection of men in her reverse harem.  So, when she returned, there were always tales of how this “friend” or that had tried to begin a courtship with her or had expressed his undying love for her.  She would then emotionally share that it was only because of his thwarted efforts that she realized it was me whom she loved.  “It took being with him to see how much I love you.”  Yes, that type of triangulation is a tried and true tool of manipulation the narcissist has mastered and learned to wield with surgical precision.

And each time she returned, true to form, I would ask her how I could trust that she wouldn’t just walk away again – something that took absolutely no effort on her part, something with little-to-no emotional or psychological repercussions for her.  You see, each time she left, as I sat there lamenting her departure, I would resign myself to set healthy boundaries and 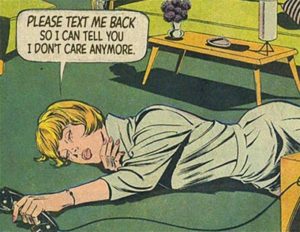 conditions to which I resolved I would absolutely adhere the next time!  “If she came back, things were going to be different.”  At least, that was the hollow promise I made to myself – to tell her the pain and misery she authored and wrought was unacceptable, that she couldn’t keep hurting me like this.  But, each time she came back, all of those healthy and reasonable boundaries instantly dissolved the moment I saw her, felt her in my arms, and kissed her.  They suddenly became unimportant.  She was back and that was all that mattered.  So each time she returned, I asked how I could trust she wouldn’t leave again.  And each time she would tell me something along the lines of, “Because I love you and I can’t live without you.  I’ve tried and I didn’t like it.”  How many times I fell for that beautiful lie.

However, as previously noted, it didn’t take long for her to begin drifting away.  I could always feel her getting distant before she started showing any outward signs.  Each time, I would try to talk to her, and each time she would share that she was feeling it too but didn’t know what to do to stop it.  As the days 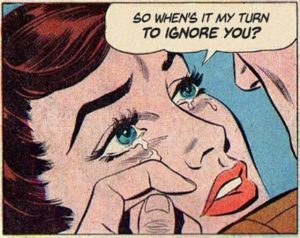 passed, and she drifted further and further away, I remember so very clearly trying to reach out to her, to talk to her, literally pleading with her to talk to me and tell me what was going on, why was I losing her yet again, but I was generally met with silence or the all-inclusive excuse, “Now’s not a good time.”  All of my efforts and attempts to not lose someone and something so precious were always in vain.  I could feel myself peering into this dark and empty abyss – a life without her – silently screaming, hoping she wouldn’t leave this time.  But, in the end, she always left.  I spent the better part of my time with Julia calmly yet earnestly and soulfully pleading with her to listen, to hear that the repetitive discard, hoover/idealization, devalue, discard phases were taking their toll and we were slipping away from each other with each cycle, but she wasn’t listening.

I spent 4-½ years with Julia before the final discard.  Four-and-a-half years of living in my own personal hell where I was endlessly gaslighted, triangulated, deceived, manipulated, cheated on several times, and all for no other purpose than to feed the fragile and shattered ego of someone who really wasn’t worthy of the love I wasn’t willing to sacrifice as easily and eagerly as she was.  And I suspect, as you have read this, whether you are still with your narcissist or without, you have said over and over again, “Me, too!  S/He did that exact same thing to me!”  Isn’t it fascinating how you and I, people who have never met, have shared eerily similar interpersonal experiences and dynamics with our abusers, our narcissists, strangers who are also equally similar?  If we didn’t know any better, we would swear we loved the same person, wouldn’t we?  Perhaps, in some roundabout way, we did.  For all of their claims of being different from everyone else, narcissists really do seem to be cut from the same cloth, don’t they?  And while we may, in the heat of that toxic relationship with our narcissist, feel with this and them is where we belong, in the end, nothing could be further from the truth.