The myth of Echo and Narcissus was always one of my favorites as a kid. To me, it represented so many different facets of relationships and the human psyche  – true love, sacrifice, longing, loss, discovery, rebirth.  Narcissus was the 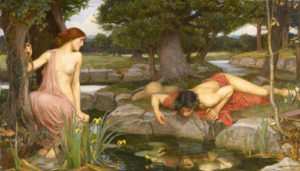 most beautiful person.  No one could compare.  One day, Echo, a mountain nymph who was cursed by Hera to only be able to repeat what was spoken to her, came upon Narcissus in the woods and fell deeply in love with him.  Narcissus saw her and spoke to her.  In a moment of passion, she thrust herself upon him but he spurned her, saying, “I don’t love you!”  Echo fought to repeat, “I…love you,” but her words were in vain.  Thinking she could win his affections, Echo continued voicing her deep love for him, over and over again, until she faded away into nothingness with only the sound of her voice echoing on the wind.  And Narcissus?  Narcissus saw his reflection in a pool of water and fell in love with his own beauty, sitting, mesmerized, at the water’s edge where he remained, slowly turning into the gold and white flower that now blooms by bodies of water:  the Narcissus. But what, exactly, is narcissism and what constitutes a narcissist?

In a nutshell, narcissism is when someone, a narcissist, is more in love with themselves than any other person.  While there are, currently, three different categories of narcissist:  extrovert, introvert, and communal – in general, narcissism is a very all-consuming and hopelessly endless love affair with oneself that’s deeprooted in feelings of vanity, superiority, entitlement, and grandiose claims of achievement that may actually have some basis in genuine accomplishments.  If you, or someone you know, has ever been unfortunate enough to become romantically involved with a narcissist, it may begin as an unbelievable whirlwind romance, but it will quickly deteriorate into a unilateral love affair of self-celebration mixed with intense jealousy of anyone who threatens to come between the empath, that’s you, and your praise and worship of your narcissist.  It’s a toxic relationship with a broken and damaged person from which escape can seem nearly impossible.

Over the course of the 4-½ years my narcissist and I were together, I could never understand why she kept coming back after we’d had a falling out.  There had been some ridiculously insignificant misunderstanding – no raised voices or harsh words,  just a simple disagreement – and she was gone.  And no amount of effort on my part – texts, e-Mails, phone calls – were met with any effort on her part, choosing, instead, to ignore and rebuke all my proclamations of love.  It was as though she’d simply disappeared and I was, once again, a nothing and a nobody.  These feelings that you are nothing and no one without the narcissist are part of the trauma bonding where the narcissist twists and distorts your sense of self to the point that you can’t imagine functioning, being, existing without the narcissist.  And when you do/say something that threatens their very fragile sense of self, they remove their presence from your life as a form of punishment.  This is what’s called the discard phase.

In the discard phase, you are being punished for a perceived slight that never actually happened.  In this phase, the narcissist removes his or her presence from your life.  During this time, the narcissist is out seeking new sources of narcissistic supply and or turning up the heat, so speak, on previously solicited secondary narcissistic supplies.  Frequently, these secondary sources are obtained and maintained with members of the opposite sex and, generally, for two reasons.  Firstly, members of the opposite sex are more likely to stroke the narcissist’s ego and give them the attention, and even affection, that they absolutely must have in order to survive.  Secondly, as an added boon, it aids in triangulation in the event that you and s/he get back together.

After anywhere from one-to-three months apart, not knowing that she was involved with someone new, I’d finally give up hope and tell her I loved her, missed her, and that I’d never forget her.  Within 24-hours, she’d reply, telling me how much she missed me, too, and saying she wanted to see me.  Needless to say, I was over the moon!  I’d drop what I was doing and rush to her or she’d come to my place.  Either way, there was a period of blissful reconciliation rife with talk, tears, embraces, affection, and the sharing of physicality. This is what’s known as the hoovering phase where the narcissist will say and do pretty much anything in an effort to get you back and keep you under their Svengali-like influence.  But this phase, unlike the discard phase, is very, very short-lived as it requires the narcissist to maintain a sustained healthy level of physical, emotional, and psychological exchange. And it’s completely irrelevant if you are matching that effort.  The narcissist simply cannot exist in a healthy relationship due to just how broken they are.

This toxic cycle repeated with my narcissist and me over and over and over again, ad nauseum.  And, each time we came back together, she would tell me how she had met someone while we were apart but he, “…isn’t anything like you.  I realized it’s you whom I truly love and want to be with.”  However, she still texted and talked to him because she didn’t know “…how to end it.”  You see, this is triangulation at its best.  The narcissist uses one person with whom they’ve been involved, even if it wasn’t romantically, to make you even more jealous and feed into the fortification of their fragile ego.  But one thing you probably didn’t know, when the narcissist tells you they met this other person, “…while we were apart,” don’t believe it for a second.  The narcissist is always on the prowl for more narcissistic supplies.  It’s only when things fall apart with you, that they will really ramp it up and begin nurturing these fallback relationships with their secondary supplies with a renewed vigor.  When it comes to the narcissist, it’s really nothing more than a juggling act of which supply to use to either make another supply jealous via triangulation or to simply spend time with to nurture that supply and their bond with the narcissist.  Either way, the end goal is always the same:  to feed into and nurture their perpetually eroding sense of self-worth and fortify their fragile ego.

As painful as it may be, you have to understand that no amount of effort on your part will ever, under any circumstances, “fix” or heal the narcissist to the point that they can or will ever become an emotionally stable individual who is psychologically capable of being in a healthy romantic relationship. Even with repeated proclamations of a willingness to go to counseling or therapy, the narcissist will always shift the focus of said counseling on you, what’s wrong with you, and what you need to do to make the relationship work.  This is all narcissists, including mine.

I was nothing short of elated when my narcissist agreed to start seeing a counselor with me.  But imagine my surprise when she repeatedly shifted the focus from her to me during our (two) sessions.  The counselor was a remarkably astute man and could see what she was doing.  Somehow, he always managed to deftly turn the focus of the conversation back to and on her.  She noticed immediately and, after we left our second session, she confided that she felt, “…[he] really doesn’t understand us and what we share.  Maybe you should continue to go alone and work on your childhood trauma.” Do you see that repeated theme of shifting the focus from them to you?  Once again, the issue is with someone else and not the narcissist.  And this is what you have to understand, for the narcissist, the issue(s) will always be with someone else.  No amount of effort, affection, love, sacrifice, counseling, therapy will “fix” what’s broken inside their fragile psyche.

“Am I A Narcissist?”