Do You Believe In L❤ve At First Sight?

It was about mid-October, 2014.  I was out for a ride.  The weather was sublime, picturesque, really, as it always is in the Southern U.S. every October.  I was heading down a section of road, that’s when I passed her.  She was tiny, about 5′ 6″, 102 lbs., sandy blonde hair pulled back in a ponytail, and she was jogging.  It was only a moment that I saw her and then we passed each other.  I vividly recall thinking to myself, “Man, I wish that was my girl.”  And that was it.  I didn’t see her again the rest of 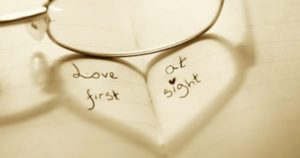 my ride.  But that momentary encounter left an indelible mark in my memory.  So the question that I present to you today, “Do you believe in love at first sight?”  Or is it really nothing more than lust attempting to masquerade as something more honorable than merely a primal, hormonal reaction to visual stimuli?  Until that moment, honestly, I never thought you could love someone with just once glance.  After all, how could you possibly love someone you’ve never actually met?

About two weeks later, I had a dream about a beautiful girl.  I very clearly recall this unbelievable feeling of an all-encompassing, all-consuming, deep, and passionate love between us.  The funny thing is, the whole dream was simply us standing together; me looking down at her and her looking up at me – both of us smiling at each other. We weren’t touching, talking; nothing.  The dream lasted less than 10-seconds.  I remember waking from it and being very disconcerted, as though I’d had something amazing right there in front of me, something I had always longed for, and then in an instant, in my waking, it was stripped away.  I couldn’t sleep the rest of the night.

About a month later, I had the exact same dream with the exact same feeling of unconditional love, something I’ve never before felt for another adult.  Again, it was the same girl.  I awoke even more out of sorts than the first time, unable to fall back asleep.  Honestly, it just wasn’t right to have that amazing love, right there for a moment, and then gone the next.  I wish I could describe it to you.  Imagine, if you will, God, the God, standing before you and He simply reaches over, gently cradles your face with both hands, and kisses your forehead.  I don’t know of any other way to describe such a pure love.  Few things are ineffable.  This feeling is one of those things.

Being very familiar with the park, I knew about where they should be by this time.  Sure enough, as I rounded the corner and started down a small hill, there they were.  I really don’t remember stopping but apparently I did.  All I know is one moment I was driving, the next I was stopped, window down, facing the girl I’d seen just a few minutes earlier.   “Hello, again,” was all I could muster.  (Witty, I know.)  We talked for a few minutes and then I asked her to have dinner with me.  She asked if she could think about it.  “Of course,” I said.  I gave her my business card and told her, “I hope you say, ‘Yes.'”  She smiled and replied, “I hope I do, too.”

About three days later, I had an e-Mail from her.  She was apologizing because she couldn’t meet me for dinner, “…not a good time in my life,” was her reasoning.  I replied that I understood, she answered back thanking me for my kindness and understanding, and that was the beginning of what would turn out to be the 4-½ year relationship with my narcissist.  Oh!  What about the girl at the beginning of the story?  Oh, yeah!

So, about a month into my narcissist and me dating, one day something just ‘clicked’ – I had an epiphany.  I remember we were driving, she was sitting next to me, we were holding hands (Awww, how sweet.  Right?) and I just looked at her.  That’s when it hit me.  She was the girl I had dreamed about.  She saw me looking at her out of the corner of her eye and nervously asked, “What’s wrong?”  I told her, “I had a dream 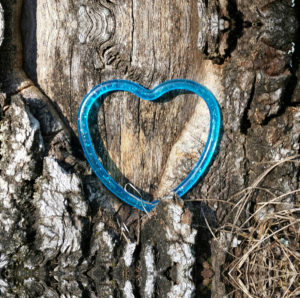 about you.  Two, actually.”  She smiled, “Oh, really?  And just what did you dream?” she asked with a Cheshire cat grin.  So, I told her.  Let’s be honest, if someone told you they dreamed about you, and in the dream you were deeply in love with them just like you are at that very moment, you’re probably going to be a bit skeptical.  Right?  I would be.  So, understandably, she had a skeptical smile on her face and tone in her voice when she asked, “And just when did you dream these ‘dreams of love’?”  I told her, “The last week of October and the first week of December last year.” The smile left her face.  Her complexion went pale, she let go of my hand and turned away from me.

I knew she wouldn’t believe me.  She probably thought I was making it all up.  If the situation were reversed, that’s what I would think.  In a very quiet voice, she almost whispered, “Those are the two times he (her estranged husband) came to see me from California (where he lived) to try and work things out.  Both times it ended in a huge argument with him storming off and leaving.  I remember, both times, I was lying in my bed, crying, asking God, ‘Where is the man who is supposed to love me?”  We held hands the rest of the drive and didn’t say another word.

So, the question remains, “Do you believe in love at first sight?”  I absolutely do.  She was that girl I passed in the park that day in October.  And in that brief moment, we exchanged a piece of ourselves with each other, a small piece of our souls (if you 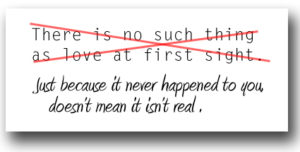 believe in that sort of thing) and were irrevocably bound together on a spiritual level.  So when she was hurting, I sensed it.  She reached out to me and I was there.  The fact that she turned out to be a narcissist is irrelevant.  Love is love – plain and simple.  It doesn’t impose conditions, limitations, expectations, or make demands.  It defies explanation, yet quantifies its own existence.  Do I regret loving her?  Not for a second.  Do I wish she would have been who I thought she was?  Yes. I think the one question that remains is, “Would I do it all over again, now that I know the outcome?”

The Prophecy Is Fulfilled