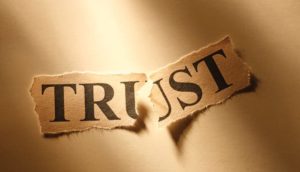 vampirically drain both emotionally and physically (sexually / physiologically) for as long as possible, but what happens after the narcissist?  Exactly what is the psychological fallout and the emotional aftermath?

In a word, mistrust.  I wouldn’t go so far as to say paranoia.  But there’s definitely a heightened awareness, an endless questioning, of the motives and intentions behind every person’s every action.  There’s a constant, mind-gnawing mistrust of absolutely every single person you know, have known, and will ever know.  After the narcissist has finished with taking anything and everything they can from you, after they’ve completely and utterly stolen your sense of identity and irrevocably tied 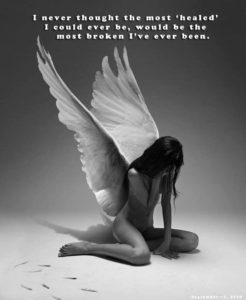 them to you via trauma bonding, what’s left of you is really nothing more than a shadow of who and what you once were.  But more disheartening than the knowledge that the most healed you’ll ever be is the most broken you’ve ever been, is the realization that you simply do not trust anyone, any longer.  And your faith in people?  Nonexistent.  Even friends whom you’ve known for years, possibly decades, are now suspect.  Their every action/inaction is subject to scrutiny.  “Why did they do this?”  Or “Why didn’t they do that?”  Even family isn’t immune to the incredulous ramping up of suspicions and second-guessing.

I can say, with absolute certainty, I have ended post-narcissist relationships that showed promise simply because I am now hyper-sensitive to the actions of someone that too closely mirrored something my narcissist might have done or said.  Granted, there might have been some merit to my paranoia, but whether there was or not is a moot point.  After my narcissist, I promised myself no matter what, no matter how painful, no matter how much I might like someone, if they did anything that even remotely hinted of a repeat performance, I was going to end it.  No questions asked.  No excuses.  No explanations.  No refunds.

I remember I used to be a very trusting and caring person before my narcissist.  But now?  Eh, I honestly could care less about a vast majority of things and people.  Pursuits and passions that once consumed me, now provide a mild distraction, at best.  Where I used to put in several thousand miles in a cycling season, I might put in 1,500-2,000 in the 9-10 months afforded me by my locale and weather, and almost every one of those miles is forced – I do it because I need to, not because I want to.  I used to listen to music every.  where.  I.  went.  But now?  Eh, if I feel like it, which I don’t most of the time.  The list of listlessness is endless.  And my narcissist?  I don’t know where she is, who she’s seeing, or what she’s doing.  But I do know that she’s moved on with her life and is pursuing another relationship.  How do I know?  Because she hasn’t tried to contact me.  Yes, even though I was the one who chose to go no contact, I know my narcissist well enough to know that if she weren’t secretly seeing someone else, she’d have already been knocking on my door.  She’s done it before.  But not this time.  And since we know the narcissist can’t leave one relationship without having another to fall back on, and into, that means she’s found a new source of narcissistic supply to suckle, drain dry, and discard, just like she did me.

Yes, you’re right.  “Shouldn’t you be happy?  She’s someone else’s problem now!”  Yeah, that’s true, she is.  And I probably should be.  But never underestimate the power of trauma bonding.  Sometimes, moving on isn’t about finding someone else to climb into bed with, it’s about making whatever uncomfortable peace with the fact that the person you thought was your everything;  your every answer to every prayer, your every solution to every problem, tear, or worry that vexed your soul and crossed your face, was perpetuating a lie for the sole purpose of taking as much as they could from you to fill an emptiness within themselves that will absolutely never come close to being filled.  And that’s the thing about an uncomfortable peace – it’s uncomfortable.  No matter how many bodies litter the landscape, no matter how many more hearts are broken, souls are stolen, dreams are crushed, and lives are irrevocably destroyed by a narcissist, the void that is at the core of their being will never be anything less than absent of substance.

I know that I will always be suspicious of any and everybody I meet.  I know that I will now question the motives of every person in my life, past, present, and future.  Honestly, it’s just not right. But when it comes to being romantically involved with a narcissist, there’s absolutely nothing that’s right.  Even the ending.

It’s All About Me!