Have you ever wondered what happens when one narcissist becomes 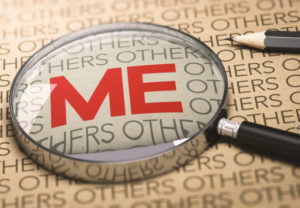 romantically involved with another narcissist?  Here you have two very insecure, remarkably fragile, immature personalities constantly vying for control, attention, affection – it isn’t pretty.  And what’s worse, in the end, one of the two is going to win.  So what happens when a narcissist becomes a narcissist’s narcissist?  (I’ll give you a second to process that one.)

My narcissist, Julia, met her narcissist, Mr. B., in Spring of 2008, at church.  At the time, she was embroiled in the throes of ending a tumultuous 10-year marriage with a man we’ll call “Fred,” who refused to work and, from what I’ve been told, “…stayed home all day and watched porn,” while she worked two jobs and still tried to maintain the house.  To add insult to injury, Fred had recently met another girl from the Russian community, we’ll call her “Veronika,” and tried to surreptitiously pursue an extra-marital affair with her telling her that he was already divorced;  however, once Veronika found out Fred was still legally married, she told him he needed to go back to Julia and work things out.

Head in hand, Fred went back to Julia, begging for another chance and she gave it to him.  What Fred didn’t know is that Julia had secretly been seeing Mr. B. for a few weeks and was already pursuing a sexual relationship with him.  As it turned out, Fred’s timing couldn’t be more perfect.  Julia and Mr. B. had just had a falling out and were broken up, so naturally, Julia took Fred back.   Unfortunately for Fred, about three days later, Mr. B. wrote a very heartfelt letter to Julia that convinced her to not only leave Fred, but to actually accompany Mr. B. on a 10-day cruise.  You see, Mr. B. was making money hand over fist, to the tune of about $40,000 a month (yes, you read that right – per month), well on his way to becoming the multi-millionaire he is today.  Julia, faced with staying married to a lazy, porn-addicted, penniless husband versus a driven and financially successful man, chose the latter…and it bit her in the ass, big time.

According to Julia, Mr. B. turned out to be an absolutely abysmal person.  The specifics of what (she relayed) he did to her are not important.  Suffice it to say that there was purported emotional, physical, sexual, and psychological abuse involved.  And after 6-years of what she detailed as an unbelievably hellacious marriage, she left him.  For about 6-months she was on her own while he supported her financially.  She shared with me that twice he and she tried to work things out but, in the end, he repeatedly showed her he was the same person who was unwilling to change and be a better husband, partner, companion, and person.

On February 7, 2015, Mr. B. called, “to talk,” and just like all the times before, they had a huge blowout that left her crying.  Later that day, her mother called saying that she had her grandson, Julia’s nephew, for the day and wanted to know if she’d like to go for a walk with them.  Still recovering from the earlier argument, she agreed.  Oddly enough, her mother told her, “…but instead of walking where we normally walk, let’s walk in the park.  And instead of parking where we normally park, let’s park at the visitor center.”  Julia just told her, “Sure, Mom.  Whatever.”  They met at about 3:00 P.M. and started to walk together.   At that moment, her mother realized she’d lost or forgotten her phone somewhere and told Julia to wait there while she went back to look for it.  And that’s where, when, and how I met my narcissist. Whatever possessed her mother to suggest a different place to park and walk, to this day I don’t know, but we’d have never met if she hadn’t.

You see, the thing about narcissists, they don’t exit one relationship, taking the time to soul-search, seeking help and healing, before beginning another relationship.  They leap from one broken relationship straight into a fresh relationship, ready to start feeding off of a new narcissistic supply.  Part of that is because the narcissist sees absolutely nothing wrong with themselves or their actions – no matter how culpable – it’s always the fault of the other person.  I don’t disagree that Mr. B. could have made more effort to be a better partner and that Julia was indeed a victim of narcissistic abuse;  however, she was/is, herself, a narcissist, as well.  Mr. B. was just better at it. And in the end, he left her a crushed and empty shell of a person. And that’s where I found her. Me and my Superman Complex.

From what I can piece together, her first husband took her for granted for 10-years and then cheated on her.  Then her second husband narcissistically abused her for 6-years.  Neither man ever truly appreciated her.  To top it off, Julia had come from a family where her father didn’t wear the pants.  Mom was (is) a despotic, totalitarian who rules with an iron fist – the stereotypical stern, iron-clad, old-world Russian woman.  Julia’s father was, at best, not the positive, strong male figure in her life that she needed and longed for.  When Fred came along, Julia was 19 years old.  Fred represented an escape from her mother and her mother’s control so, naturally, she gravitated toward him.  However, Fred was lazy and not the least bit driven, but Julia, nevertheless, spent the next 10-years in an unhappy marriage to him.  Then Mr. B. came along and she couldn’t fly into his arms or bed fast enough.  Smart, successful, financially secure, and 11-years older than her (and Fred), he was all the things she’d wished her father was and what Fred needed to be.  From what she shared with me, Mr. B. was also a male version of her mother – domineering, controlling, demanding, unyielding…and a narcissist.  Subconsciously, she was drawn back to her mother in the form of Mr. B.

When I came along, I was the release from Mr. B., Fred, and even her mom, mainly because, unlike them, I worshipped the ground she walked on.  I was her empath who both felt her pain and shared in it along with her.  She’d never been in a truly loving relationship like ours.  I represented a reprieve from the cold, emotionless, unforgiving prison that was the 6-year marriage she was trying to escape.  But Mr. B. had, “…poisoned [her],” as she put it.  “Sometimes, I’ll say something and hear his words come out of me.  It’s like I’m just standing there listening to him speak and can’t stop what he’s saying.”  I suspect that Mr. B awoke latent narcissistic characteristics within her, mannerisms and personality traits that she possessed as learned behaviors from her mother that were suppressed until Mr. B.  I think I was the trigger, the catalyst, she needed for her narcissistic tendencies to manifest and take on a life of their own when I assumed the role of her empath.  And that they most certainly did.

Regardless of where, or from whom, she learned to be the person she is today, she 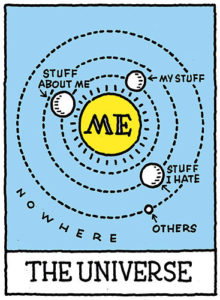 became my narcissist and my greatest relationship regret.  In the end, about the only things I learned from her were that I was a nothing and a nobody in her eyes and in her microcosm where she was the center of her own Julian Universe wherein she expected everyone and everything to revolve around her.  I also learned that I’m not going to accept being (mis)treated and broken down by anyone like that ever again, so I guess there’s that.  Oh, and I did learn a little Russian, too, so, “Спасибо, Юлия. Ты любовь моей жизниПока. Пока “

I Would Take Poison From Your Hand