Free From the Chains That Bound Me

As we revealed yesterday, I got a text this past weekend from a friend stating they saw my narcissist, Julia, out with someone new, “Artie.” Julia had told me all about Artie back in May, saying he was, “…just a friend.” It would seem, however, that this “friend” has now been promoted from a secondary source of narcissistic supply to a primary source.  In other words, my narcissist is now dating someone.  To be honest with you, I’d been speculating on how I’d feel the day I discovered my narcissist had moved on to a new victim.  Now I know.

In the months that have followed the last breakup betwixt my narcissist and me, where I decided to go no contact, there were a few days where I was on top of the world!  I felt great!  I was free from my narcissist and I was loving life.  But those days were very few and far in between. The truth is, a majority of so many days, all I wanted to do was just crawl into bed and sleep away the feelings of being absolutely miserable – lonely, alone, unwanted, 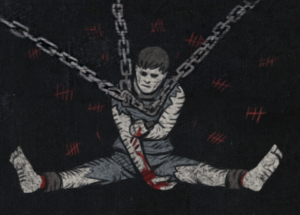 deep and disheartening despair, feelings of missing her, of missing our time together, of missing feeling like I actually mattered (somewhat) to someone who meant the world to me.  Does this dichotomic dynamic sound familiar?  If you’ve ever been involved with a narcissist, or perhaps you currently are, then I’m quite certain this pretty much describes the mind-bending, heartwrenching Reality Rollercoaster of your daily existence.

In short, what I was going through were the withdrawals of being without someone who had become, not just my world, but my whole solar system, my universe!  I was now trying to piece together my life without my narcissist…at least, what was left of it.  Since I had built my entire world and my existence around her, I honestly had no idea how to function without her in my life.  Some might argue, “Only a weak person would ever allow themselves to so completely become dependent on another person.”  Perhaps.  And to whoever might utter those words, I would simply say, “You’ve obviously never been involved with a narcissist.”

The initial love bombing at the beginning of the relationship, and the subsequent cycles of hoovering and trauma bonding phases over the following 4-½ years I was with my narcissist, had done their magic.  Trauma bonding is a fickle mistress.  Pace UK notes, “Although the victim may disclose the abuse, the trauma bond means that the victim may wish to receive comfort from the very person who abused them.”  I don’t believe I could have put it any more accurately or succinctly.  More days than not, my narcissist was all I could think about.  I wouldn’t say I was consumed, but my thoughts were undeniably preoccupied with my narcissist.  Where was she?  Who was she with?  Was she even thinking about me?  Missing me?  Did she want to be with me as badly as I longed to be with her?  “Today, yesterday;  what longing with tears for you.”

You have to understand, this was long before I discovered that I was suffering from trauma as a result of exposure to someone with NPD – Narcissistic Personality Disorder.  And as I began researching, reading, researching some more, it was quite literally as though someone had silently sat, observing my narcissist and me throughout our time together, and taken notes.  It was as though all that toxic time with her was whittled down to a few paragraphs about someone who is, and always will be, emotionally and psychologically broken. About how they seek out and then emotionally and mentally drain their empath to the point they’re an empty husk to

be nonchalantly discarded.  The narcissist then moves on, repeating this cycle in perpetuity.  In essence:  the narcissist is beyond salvation or redemption.  They will always be the abysmally insecure, self-absorbed, emotional vampire whom you first met, fell in love with, and thought you could save.   My beautiful friend, I’m sincerely sorry to tell you, “You cannot save them.  Not now.  Not ever.”

As time has progressed, I have slowly begun to rediscover myself.  I have begun to, once again, take pleasure in things that once brought me so much joy.  I’m not back to who I was before I met my narcissist and the incessant and repetitive cycles of abuse and manipulation began, but I’m closer now than I have ever felt since I first met Julia in February of 2015.

So how did I feel when I got the text that my narcissist was on a date with someone, kissing them?  To be perfectly honest with you, I felt absolutely nothing.  Initially, I

thought I was numb, bereft and incapable of any real feeling.  But then I realized, I wasn’t numb or devoid of anything.  What I was feeling was indifference.  I honestly didn’t care anymore about my narcissist, who she was with, or what she was doing.  And then I realized, it was because my narcissist no longer held any power over me.  Since I received that text late Saturday evening, I have felt absolutely amazing – free!  Like I have been released from shackles and chains that bound me for far, far too long.

As for my narcissist.  I honestly can’t wait to see where this new relationship goes.  As I predicted several weeks back, my narcissist would most likely promote one of her many male “friends” to the exalted position of boyfriend (she always hated that monicker).   Not only did she do so, but she broke a cardinal rule:  never date someone with whom you work.  It’s only a matter of time before their relationship begins to deteriorate.  And then they’ll be faced with having to see each other daily at the hospital where they are both nurses.

For now, I’m just so happy that I no longer have to worry she might show up on my doorstep at 11:07 PM, which she did one night a couple of years ago, saying, “I just had to see you.”  Perhaps, when things start to tank with Artie, that might transpire but, by then, I will have traveled so far down this road to healing, I suspect I’ll probably be able to finally talk to her without projecting any feelings of anger, resentment, or disdain.  Only time will tell.  However, one thing I do know with absolute certainty, at this very moment, I am nothing short of elated that she is no longer my narcissist.

The Prophecy Is Fulfilled