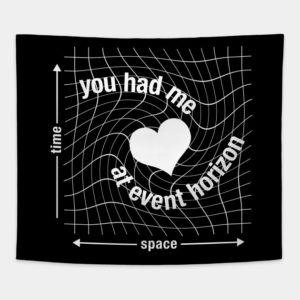 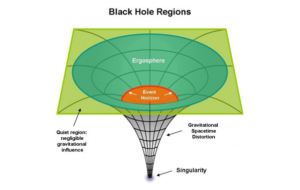 As with a black hole, anyone in the “quiet region” is safe from the effects of knowing the narcissist as long as they don’t get too close.  You might see the narcissist in passing, cordial salutations and dialog are exchanged, and that’s it.  No harm, no foul.  But as one approaches the ergosphere, the effects of the increased gravity become more noticeable;  however, anything residing within the ergosphere has to fight much harder to remain outside of the event horizon.  The narcissist’s “friends” and “loved ones” reside within the ergosphere.  The narcissist keeps these secondary sources of narcissistic supply ever close at hand, feeding off any and all as needed to maintain their elevated false sense of self and reinforce their fragile ego.  Every now and then, a friend might get pulled closer to the event horizon, but they don’t generally get close enough to become a primary source of narcissistic supply – the “promotion” you absolutely do not want to be on the receiving end of.

For those few unfortunate souls who do enter the event horizon, all hope is lost.  Sometimes, a secondary source is “promoted” to a primary source, i.e. a “friend” becomes more than, “…just a friend,” although that’s not always the case.  Regardless of from where the new supply hails, it’s within this parasitic paradigm that those the narcissist has promoted to a primary source of narcissistic supply are

systematically disassembled as the narcissist slowly pulls any and every part of all the good and beautiful things that makes them, them, apart, feeding as an emotional vampire – the systematic spaghettification I promised you earlier.  The thing is, the primary source doesn’t actually realize they’ve passed the point of no return.  At least, not right away.  It’s postulated that if one passes the event horizon of a black hole, their feet are pulled down faster than their head as the gravity is much stronger at the point closest to the black hole.  And as you are both simultaneously stretched and compressed, torn apart molecule by molecule, atom by atom, you are (supposedly) fully cognizant of what’s going on but completely unable to stop the process.  And this is exactly what happens when one becomes romantically involved with a narcissist.

As the relationship progresses, you can see yourself losing yourself; your identity, your sense of individuality and uniqueness, with the relationship becoming your new identity, but have absolutely no idea how to stop it.  You notice your narcissist has begun drifting away from you, far away from being the amazing person you first met and fell in love with.  You think to yourself, “Maybe if I just try harder.  Maybe if I just give more of myself to him/her and to this (relationship), s/he will come back to me.”  And that is the cyclic trap that one falls into with a narcissist.  Of all the sad truths, the saddest is that no amount of giving, of sacrifice, of selflessness, will ever be enough to placate the narcissist or their insatiable appetite.  One could quite literally give every ounce of everything that comprises the whole of who they are to their narcissist, and the only words out of the narcissist’s mouth would be, “You’re just not trying hard enough.  I need more.”  Does that sound familiar?

And, believe it or not, sometimes a narcissist does actually wind up becoming romantically involved with a narcissist.  This is what happened to my narcissist when she met her second husband, as we outlined in What Happens When a Narcissist Falls for a Narcissist? Imagine two black holes circling each other, both vying for control and dominance, each one draining and slowly suckling away at the other as much as they possibly can, vainly attempting to fill the vast and incomprehensible emptiness that resides within both of their beings – emptiness trying to fill the emptiness with emptiness.  Yeah, it’s not a pretty picture.

Did you know that you could actually put entire solar systems into a single black hole and it would still never be “full?”  In fact, a black hole exists because too much matter has already been crammed into a single space – more matter than can exist within that space – and that is when the black hole collapses in on itself and is formed.  How does all this relate to our narcissist?  In essence, there is no difference between a black hole and a

narcissist.  Whatever childhood trauma, or traumas, that took place to form our narcissist, there is absolutely no escaping, unscathed, if one is pulled too close to them or, worse yet, sucked in.  There is not a single person that I know of, myself included, who has been romantically involved with a narcissist who has escaped without the emotional and psychological scars (and some unfortunate souls even physical) to prove it.  And no matter how much time passes, afterward, you are never truly whole again.  You are never truly healed or recovered from your time within the narcissists intense and unyielding draining presence.

Ending a relationship with a narcissist is like ending no other relationship you’ve ever had before.  With other, normal relationships, after that initial heartache and grieving period, there are reflections of fondness and remembrances of good times.  But with a narcissist, it’s emotionally and psychologically debilitating.  You exist in a daily fog of anxiety and angst that permeates into every facet of your life.  In point of fact, as we discussed in our post from three weeks back, you are a survivor who suffers from very real C-PTSD (complex post-traumatic stress disorder).  This is what people

do not understand about being involved with a narcissist.  It’s not a simple matter of “just leaving.”  Between the initial love-bombing phase, the subsequent trauma-bonding, then the ensuing seemingly endless cycles of discard and hoovering phases, there is no “just leaving.”  Your narcissist has mastered the craft of ensuring you are theirs until they have finished taking every last bit of all the beautiful parts of you that are you.  And, even then, there’s still no guarantee they won’t return months or even years later, when you have recovered and regained some remnant of the you that once existed before the relationship, the you that drew them to you in the first place, attempting to resurrect the “relationship” for no other purpose than to start feeding off of you again.

If you have been unfortunate enough to become involved with a narcissist, you know this all too well.  And as you sadly discovered, once you are past the event horizon of that particular emotional and psychological black hole, you can 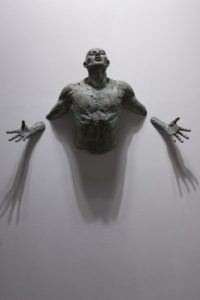 attempt to escape its pull but the reality is that very few ever successfully do so.  This is evidenced by the constant back-and-forth we’ve experienced in a seemingly endless procession of discard and hoovering phases.  In the end, as those of us who have been involved with a narcissist have painfully discovered, if you are unable to leave and stay gone, if you are not able to maintain no-contact or go grey rock, the only “escape” is to then dive straight into this abyss headlong, and hope you come out on the other side, somewhere else, with some vague vestige of you remaining intact.